A question of balance Why V6 Power?

Why V6 Power? A question of balance

The MXV6 was originally conceived as a one off. A personal challenge. A project to prove what was thought to be true; The benchmark driving dynamics of this Sports Car are not matched by the powerplant. Its replacement could elevate the ownership experience to another level. But what with? Whatever it would be, it had to normally aspirated and more than 4 cylinders.

The place of full time work during the incubation period, was Overfinch. V8’s were scattered around the workshop, engine transplants were a daily occurrence and the knowledge and experience of the workshop engineers were there to be tapped.

Naturally the V8 sprang to mind. But it just didn’t seem right. A V8 was overkill. Too heavy and would somehow overpower the little sports car (literally and figuratively). No. The MX5 isn’t a muscle car. It’s purity is its greatest virtue so keeping all that was good about it was pivotal to the concept. This wasn’t simply the pursuit of power and performance figures; the result had to feel right.

So four is too few and eight too much; a sweet, high revving 6-cylinder engine would surely have the sought after characteristics? An inline 6 would be too long, so the hunt for a suitable V6 was on. After extensive research, the Ford Duratec V6 was deemed the most promising candidate; more specifically, the Jaguar S-Type 3.0l variant.

The Duratec V6 has an impressive pedigree; originally a Porsche design, then Ford, with input from Cosworth. As well as powering humble saloons, derivatives of the Duratec V6 power more premium cars from the Mondeo ST24 and ST220 to the Noble M12, Morgans and Marcos’. The Jaguar version looked like being the best with a forged crank, DAMB tappets (Direct Acting Mechanical Bucket). It is oversquare with a bore of 89mm and a stroke of 79.5mm, so is a high-revving engine that develops max power at 6750 rpm; features that have made it a popular choice among race engine builders. Such engines have campaigned successfully in Sports car racing and substituted the fragile and expensive 6R4 engine in group B rally cars.

This had to be the right engine? It ticked all the boxes plus, almost unbelievably, it was reliable, cheap and plentiful. Building the V6 MX5 wasn’t, however, without its challenges. It’s not the most compact engine with chain driven quad cams and VVT. But it is all aluminium, so it was in with a good chance of being no heavier than the cast iron MX5 lump it would be replacing; so important in keeping the critical weight distribution right.

There was simply no way of knowing if this would deliver on the vision… without building it.

The full build story of our V6 MX5 is documented elsewhere but after several iterations, false starts and much perseverance, the proof is here. It works. And by that I mean it delivers on the vision. Light, high revving, sweet, tractable and of course, oh so tuneful. It is a balance that suits the car beautifully. It takes everything about the original MX5 and somehow resonates with it; elevating the whole experience to a new level. Not just the performance. It’s quick, sure it’s quick but much more significantly, it has soul. 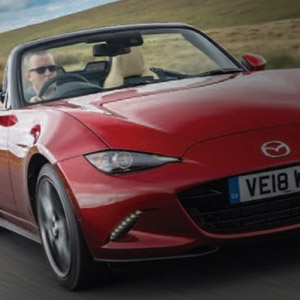